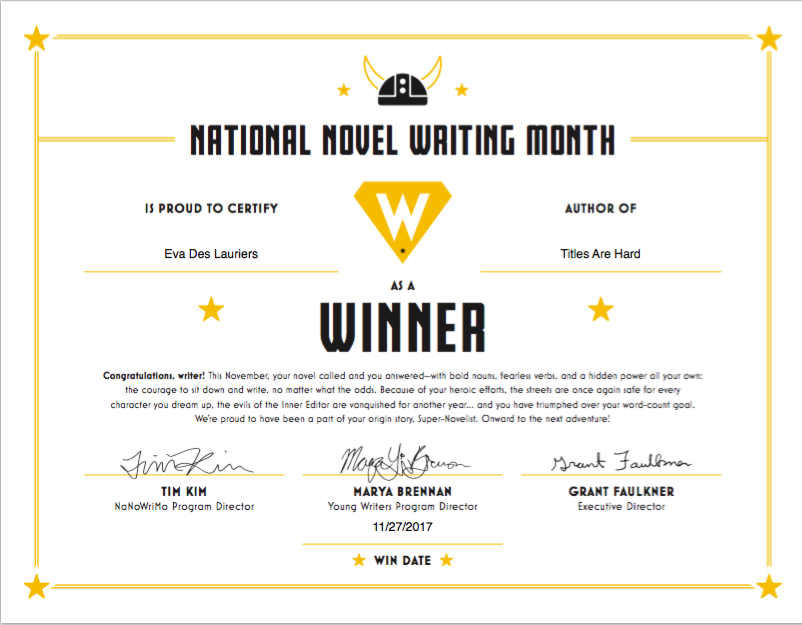 I did it! I did it! I won NaNoWriMo a few days early by hitting 50K words on Monday. I am now at 55K, because this thing is far from over.

I am so proud of myself and thrilled and oh my god there is still so much work to do. Like I wrote on my Instagram post, I’m a whole mess of thoughts and emotions right now.

Because the thing is (the miraculous thing, really) is that I never doubted I would reach the 50K goal. Once I got rolling this month, the words never stopped flowing. I am amazed and excited by this, but what is troubling me (because there is always something troubling me) is that I’m nowhere near close to the end of the story. I’m maybe halfway? Not to mention editing is going to be a beast.

For starters, I finally figured out where I was going about 15K words in. I will likely be eliminating the first third of what I wrote. Also, once I scrolled to the top of the draft that I started on November 1 (which I hadn’t done since I started to avoid getting trapped by rewrites), I realized that I had created an entire subplot that I completely forgot about and, thus, abandoned about 20K words in. You know, like you do.

Then, when I only had about ten thousand words left, a new character popped up who I hadn’t planned and he has almost completely derailed one major arc of the story. But I love him so I am finding a way to make it work. That is the joy, game, and chase of writing fiction.

I just have this hearty dose of belief that I haven’t yet felt as a writer (the only exception being when I started Brimming) (I’m just full of parentheticals tonight). It’s exciting and I know I need to just ride the wave since most certainly a time will come when such belief is challenged and threatened and very difficult to find.

If you participated in NaNoWriMo this year, I hope you had a blast and enjoyed the highs and lows that a writing project of this magnitude provides, whether or not you “won”.

As reward to my Brimming readers for putting up with almost all of my November posts being about this topic, I’ve decided to include an excerpt from my work-in-progress below.

I’ve never put my fiction writing out there, so bear in mind that it’s rough and silly and only a tiny piece of the story. Basically, don’t judge it TOO harshly. Still, for the curious, an  excerpt from my as yet untitled novel because titles are really hard:

She had been walking toward the bus stop that afternoon when a sun-faded red Tercel pulled up to the curb. Drew. He rolled down the window and yelled out to her,

“You know, picking up women off the street is generally prohibited by law and the guidelines of human decency.”

“And here I thought I was being quite decent by offering my friend Paige a ride home?”

“I’ll only come with you if you never use the term ‘hot stuff’ ever again,” Paige said, already walking toward the car.

She climbed in. The scent she had come to know as Drew hit her square in the chest. Shaving cream, spearmint, and something muskier that she hadn’t been able to identify. It made her head swim, but she would remain calm as sometimes-friendly-generally-surly Paige instead of mad-lusting-crush-on-Drew Paige. A ride home definitely broke the rules of school-only contact, but she hated the bus that much.

“That’s just a promise I can’t afford to make, Paige,” he said looking out of the windshield wistfully.

“But adorable. Don’t ever forget adorable,” Drew said, smirking as he crossed back into traffic.

“Keep telling yourself that, Chapman.”

“Oh, nice use of last names there, Mendoza.”